My friends complain that I don't go out enough, but I want them to leave me alone because hello, I'M READING
3 BOOKS 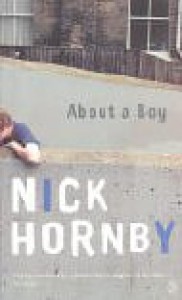 Nick Hornby is a feel-good comfort read for me. Even though he tackles people and situations that are difficult there is a hopefulness about his writing and characters that set my little heart a flutter.

I'd be surprised if you weren't at least vaguely aware of About a Boy- the movie with Hugh Grant and Nicholas Hoult was quite popular and pretty damn good in my opinion. It follows the lives of Will, a good but shallow thirty something, and a young boy with a scary home life and quirky personality named Marcus. Their lives become hilariously and tenderly interlinked. Hornby has a real knack of writing believable characters and interesting plots. It would be too easy to make Will into a completely sleazy, disgusting person and have Marcus be the little cherub that turns his life around. Or even to have Will as the rascal-with-a heart-of-gold that makes Marcus cool a-la Danny and Sandy in Grease. Instead we get 3d characters that change and grow and that I was really sad to part with at the end of the book. I gave it three and a half stars, just because it's excellent but not absolutely earth shattering but it's absolutely a book worth the time and money. 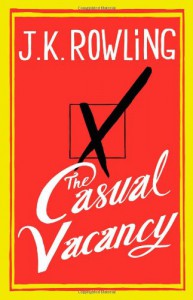 J.K Rowling admits to being a big Jane Austen fan and I think it's very easy to see the Austen influence in both the narrative voice and the stream of consciousness she uses. personally, I love it- to me It feels like being wrapped in a cocoon and carried through the story.

It was quite well publicised that the casual vacancy was/is a big departure from Harry Potter but, exactly like Harry Potter, the characterisations are brilliant. I felt like every single character had been stolen from someone I knew in real life and my view of them changed constantly as I was shown the different faucets and layers to their personalities. Don't let the blurb put you off- it doesn't sound all that exciting, but it's absolutely brilliant.

*slight spoiler here, but it's something revealed in the first few pages of the book anyway*

The book is set in the small rural town of Pagford which seems on the surface to be pretty idyllic and quintessential English. The story starts with the death of a local council member named Barry. As his seat opens up we are shown the seedy underbelly and complicated web of this little town as people fight over the seat to push their different agendas alongside struggling with their own day to day lives. Although there are definitely some characters you root for and ones you actively dislike, it is a sliding spectrum and most people (as in real life) fall into a shade of grey.  It sort of reminds me of 'Love, Actually' (the Richard Curtis film) in which everyones lives are interlinked and even when someone does something that makes you cringe or makes you angry it is completely believable and if you can't sympathise with them you can at least see where they are coming from.

The pacing is brilliant, everything feels like it is revealed to you as it is revealed to the characters themselves and yet somehow it's not slow. J.K is a master of the 'show don't tell' school of writing and the story deals with the issues of class, prejudice and privilege head on without seeming preachy or overly simplistic. Why is my review titled "Welp" you ask? Well because that's what I felt like once the book started to reach it's conclusion. I felt like I had the wind knocked out of me. J.K Rowling described it as a "tragi-comedy" and I couldn't agree more. I laughed, I cried and I got angry on behalf of J.K Rowling because I honestly feel like this book didn't get the attention it deserved- I feel like if she hadn't wrote Harry Potter people would be raving about this book, but people are refusing to approach it seriously. If you are thinking about reading this book, then do it and I promise you will not regret it.